Millions of us work with computers all day. Whether you’re a receptionist, lawyer, telemarketer or programmer, your other job title is ‘computer operator’.

And yet, many of us are really poor at operating our computer. We struggle to complete straightforward tasks, or do them inefficiently. The computer often ‘breaks’–or so it appears to us–and we don’t know how to fix it.

If we used a hammer all day, but constantly missed the nail, would we be satisfied with our work?

Geeks frequently express frustration when they’re watching the average office worker complete tasks. They bite their tongue, resisting the temptation to say “let me drive” and push their colleague’s hand off the mouse. I often give in to this urge.

Why are we such poor computer operators?

I routinely give pointers to my family and colleagues. I explain how find and replace works, for example, or teach them some common keyboard shortcuts like CTRL + C and CTRL + V. These may sound basic to a lot of you, but I don’t think they’re commonly understood efficiencies.

However, tips and tricks aren’t going to turn the disinterested and frustrated into capable computer users. Among my peers, the most proficient computer users have a confident attitude of curiosity and discovery around their devices. This attitude is very common among developers, I think, but it’s also present in others.

A change in attitude, not tips and tricks

That attitude boils down to this question: “how can I do this task more quickly or efficiently?” That’s how they learn practices like keyboard shortcuts and coding macros for repetitive tasks. More importantly, it’s why they tend to search the web for solutions to their computer-related problems. I recently had an IT professional tell me that 80% of his job was knowing what to google. 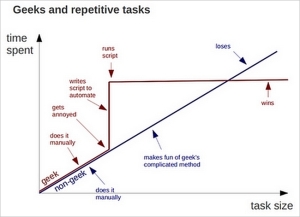 Put another way, advanced users bend the computer to their will, instead of the other way around.This chart–I searched for but couldn’t find its original source–explains this concept tidily.

I appreciate that lots of workers don’t want to be more efficient, or don’t have the freedom, confidence or time to experiment with other ways of working. And I know that lots of people aren’t happy teaching themselves.

And yet it’s a shift in attitude like this that can ultimate eliminate a lot of rote work and drudgery from the average computer operator’s work life. I’m a little ashamed to admit this, but when I solve a particularly challenging issue on my Mac, I feel a bit like Hugh Jackman in this laughable scene from Swordfish. I may even quietly mutter “I’m in” to myself.