“A crisp, smart urban comedy about modern relationships in crisis.” That’s how the Vancouver Playhouse introduces their newest play, This, from Vancouver-born playwright Melissa James Gibson. The play, directed by Amiel Gladstone, had its Canadian premiere last Thursday night.

I should disclose, before continuing, that Ami and I were classmates at UVic and I have, on at least one occasion, taken his money in a hockey pool.

The production is really solid. Alison Green’s set elegantly works as a hyper-realistic apartment for the main action that morphs into a number of more abstract satellite locations. The actors seemed to have a few opening night jitters, and but they soon found their feet and, with a few exceptions, delivered worthy performances. Among the cast is a Canadian icon, Megan Follows, of Anne with an E fame. 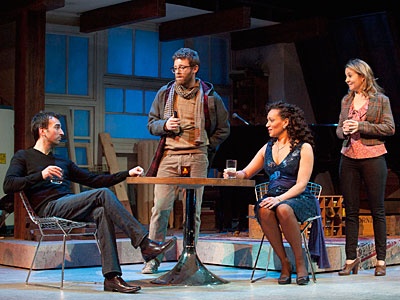 The action was pacey and entertaining, and despite the merciful lack of intermission, I didn’t glance at my watch until 10 minutes before the play’s conclusion. The opening night audience was delighted, and I missed a few lines thanks to the volume and duration of their laughter.

For the play is funny. It invites you into the sharp-tongued conversations of an ethnically-diverse set of attractive professionals living in New York. One’s an African-American jazz singer. Another is a French doctor. Another is a Jewish, gay mnemonist (I wanted to see a whole play just about him, a man who remembers everything). It’s a bit like Rent, but with fewer the songs.

Gibson earns her laugh through wordplay. In fact, the play is obsessed with language. The characters constantly talk about talking and words: How do you pronounce “Brita”? What’s the French word for “resilience”? What is the precise definition of “dinky”?

Halfway through the play, one of the characters asks, exasperated, “can we stop talking about punctuation?” Amen.

And yet the audience was captivated by the cut and thrust of the dialogue. And, after all, isn’t this kind of repartee as old as Shakespeare? Or older? Why was I so dismayed?

Maybe it’s because the plot was so scant, and so precarious in its formation. The play’s first important incident is an infidelity, and it seems vaguely unconvincing. Often, I felt that Gibson had spent too much time on the wordplay, and not enough on rendering real bonds between the characters.

I might feel better if the play saw itself strictly as a light comedy or farce. However, This takes a dark turn at its climax, a turn that feels out of place and unearned.

I left the Playhouse feeling both amused and bemused. What is this play really about? And how seriously am I supposed to take it? How modern relationships are alienating? That grief never leaves us? That friendships are fragile and temporary?

Charles Isherwood’s review of the off-Broadway production of This says that it’s:

A play about how we process love, hurt and loss by concocting tidy stories to recall our experience, or reshape it — and sometimes to frame a happier future too.

Closer to home, The Sun’s Peter Bernie seems to agree with me.:

…let This lag and audiences would realize just how shallow the supposedly complex story really is. Less a case of artistic craftsmanship than slightly cynical manufacturing of a Neil Simon comedy for a new generation, This is best presented at a romp that’s not far from farce.

Don’t get me wrong–This is an enjoyable evening of theatre. There’s just something a little hollow and false at the play’s centre.

This runs at the Playhouse through January 29.

A geeky footnote: It struck me that, for a play set in 2009 (as far as I could tell) among 30-something New Yorkers, it’s strikingly free of technology. One character takes a call on a cell phone, and another once refers to email. There is nary a laptop or smart phone to be seen or mentioned. I’ve noticed this in other contemporary plays, and I suspect that it’s intentional on the part of the playwright. They’re keen not to root the play too specifically in time or space. How, for example, could you make a play that mentions, say, fax machines and floppy discs feel timeless?