About 18 months ago, I did a pretty unscientific analysis on Mashable regarding the clickthrough rate for Twitter accounts. That is, when you share a link on Twitter, how many of your followers click it?

I arrived at a clickthrough rate (CTR) of 1.7%. Looking at a couple of other sources, that seems quite accurate. It’s safe, I think, to estimate a CTR of 1% to 2% for Twitter for a small to medium Twitter account (say, up to 10,000 followers).

It’s worth considering Anil Dash’s great analysis of being on the famed (and now deprecated, I think) Suggested Users list. As he notes, he acquired hundreds of thousands of new followers, but “being on Twitter’s suggested user list makes no appreciable difference in the amount of retweets, replies, or clicks that I get.”

As with all forms of marketing, quality of audience matters far more than quantity.

That’s all a bit of a long introduction to this observation, which reminded me of a phenomenon on Twitter and other corners of the social web.

Earlier this week, I had a (quite unremarkable) tweet retweeted a lot. Here it is:

A musician has to sell more than 12K downloads on iTunes to earn a minimum wage: http://bit.ly/fc257yless than a minute ago via bitly

As you can see from this Bit.ly page for the shortened link, it was clicked 3872 times. I’d never actually checked out the top referrers for this page–that is, where people were when they actually clicked the link: 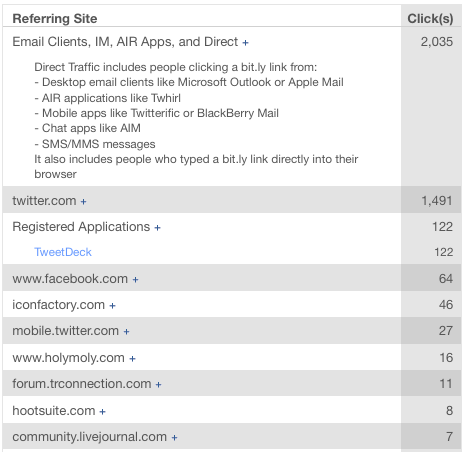 As a second data point, here’s a recent tweeted link that was clicked about a thousand times.

So, that means that 52% of the clicks came from that first big category, and 38% of traffic comes from the Twitter site. It’s too bad that Bit.ly can’t further unravel that first category, eh? How much comes from HootSuite, how much from SMS, how much from chat and so forth. As you can see, most people access Twitter without visiting Twitter.com.

In our workshops and talks I give, I often have to explain to people that they should think of Twitter and Facebook as services or utilities, as opposed to websites. As we can see here, Twitter is water that flows from a lot of different taps, not just from Twitter.com.